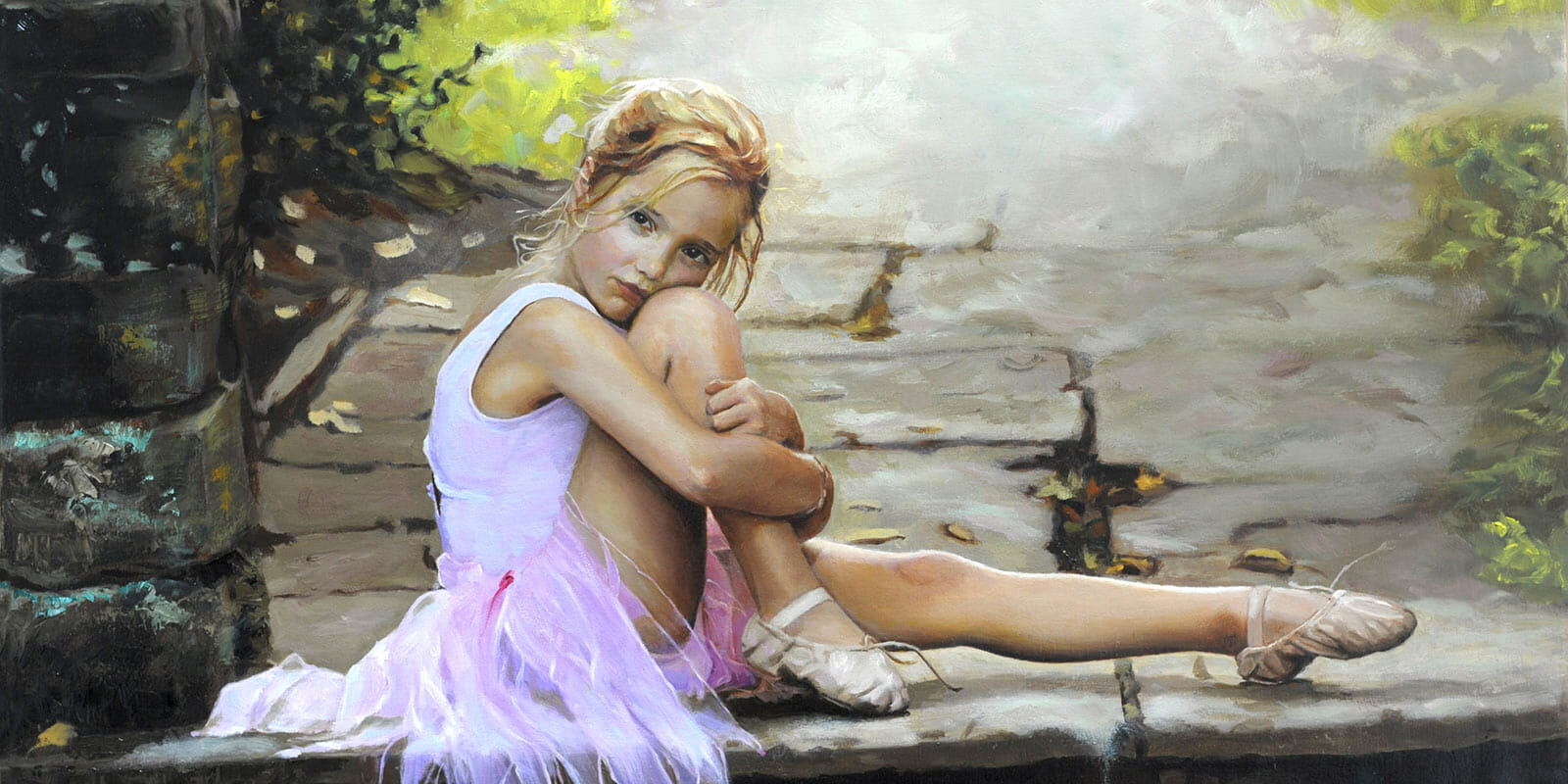 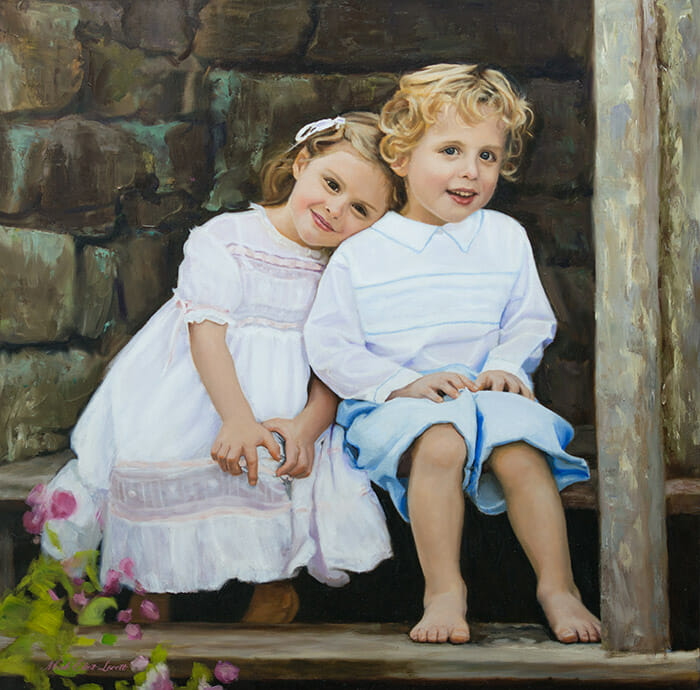 This was one commission that I knew Mark would be very excited about, a chance to paint adorable twins in a “southern style” dress. I have blogged previously about the photo shoot and now it is time to show the painting stages and the final product.

Below is a resource photo to show the likeness Mark achieved: The drawing is the map of the painting. It has nothing to do with value or color, just framing the edges of the key elements. Mark placed the faces along the diagonal and a little off center. The post on the right and the board under the feet frame the scene. This stage shows a very quick pencil sketch on the canvas and outlines some structural elements.

Now Mark is laying in value and color. He used a very minimal and subtle palette. Now the painting is getting close to being finished. Some of the colors he used were yellow ochre and umbers in the boy’s hair. Ultramarine blue on the Cooper’s pant and shirt.  McKenzie’s dress is painted with purple dioxazine and alizarine crimson.

All colors were muted with complimentary colors or greyed out. Earth tones were used for skin and hair. The lighting was a challenge because it was lit from the top or sky and was flat..

The background was the biggest challenge because it needed to show some depth, not just a flat wall and the overall effect became 3 dimensional. Mark added lots of thick paint with a palette knife to the post and wall.

Below:  Finished 30×30″ Oil on linen
Canvas Painting
by Mark Lovett 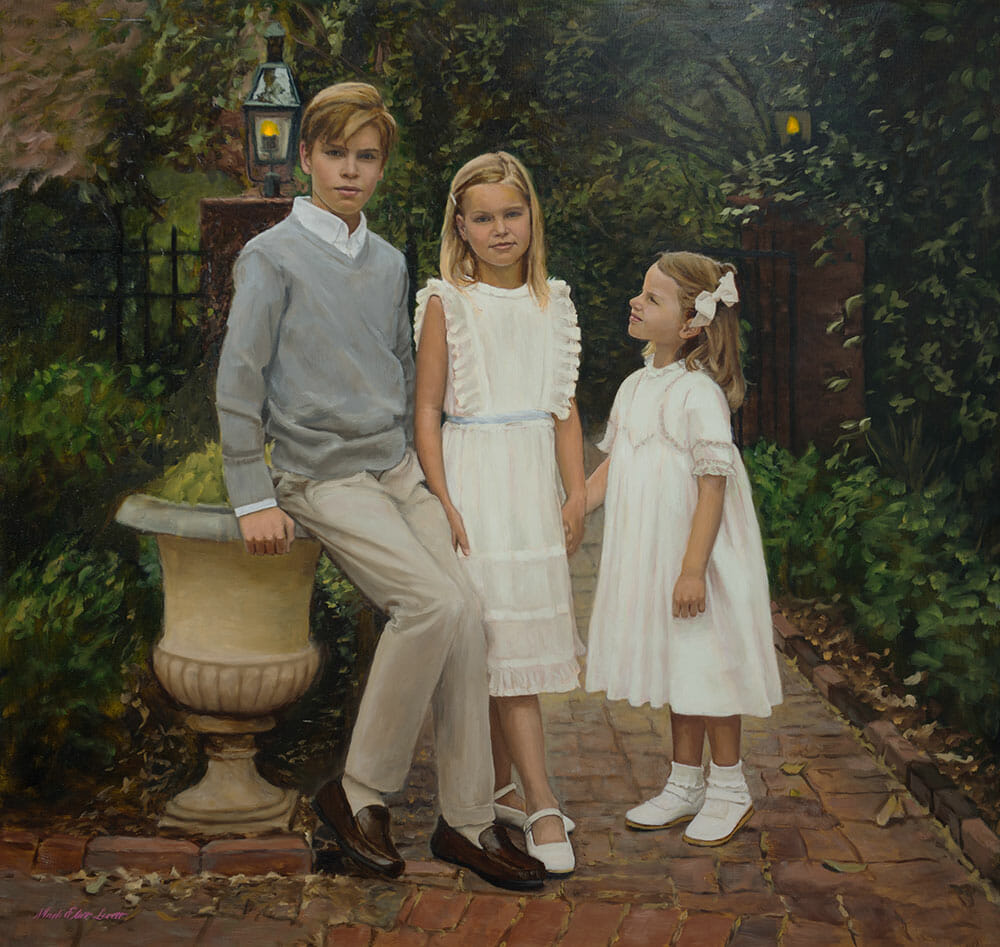 Just finished a new portrait painting commission for a Charlotte, NC family of three young children (brother and two sisters). The final, 40×38″ oil on linen canvas,  painting surpassed all expectations. Creating this family portrait was a wonderful experience and I’m going to share it with you. READ MORE

I made a quick video showing the stages of the painting from beginning to end, and added some of my guitar music in the background. 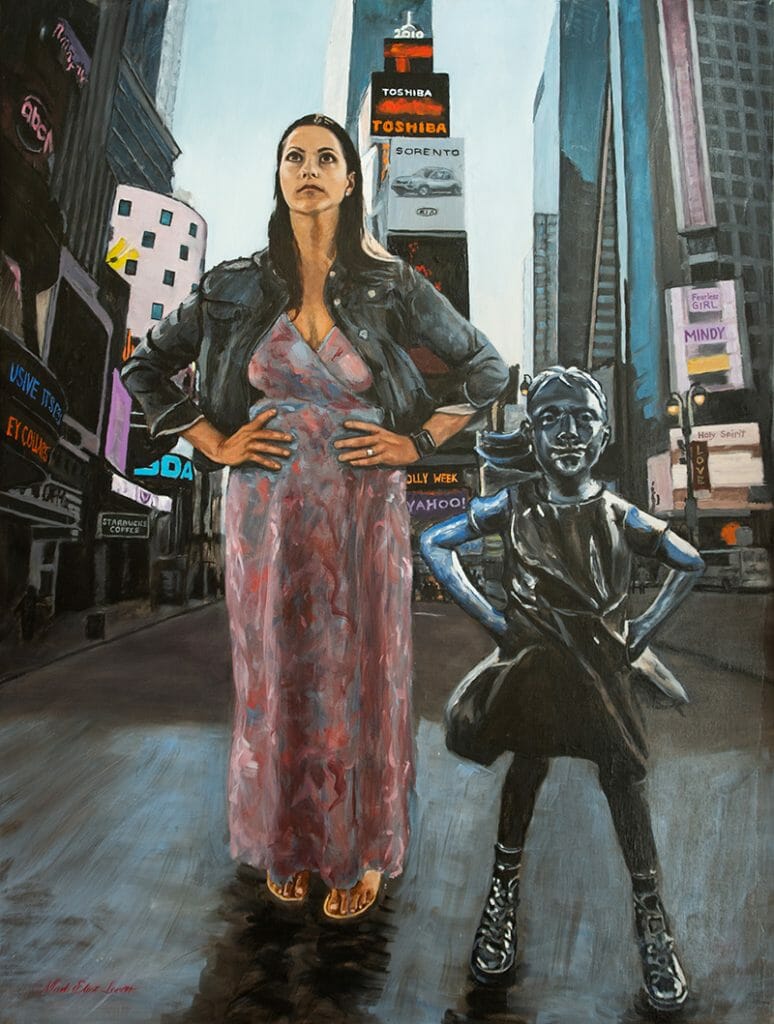 By markloveCommission a Portrait Painting

My client sent a photo of his daughter standing in front of a statue, called ‘Fearless Girl’,  in New York, and proposed that I create an oil painting inspired by… 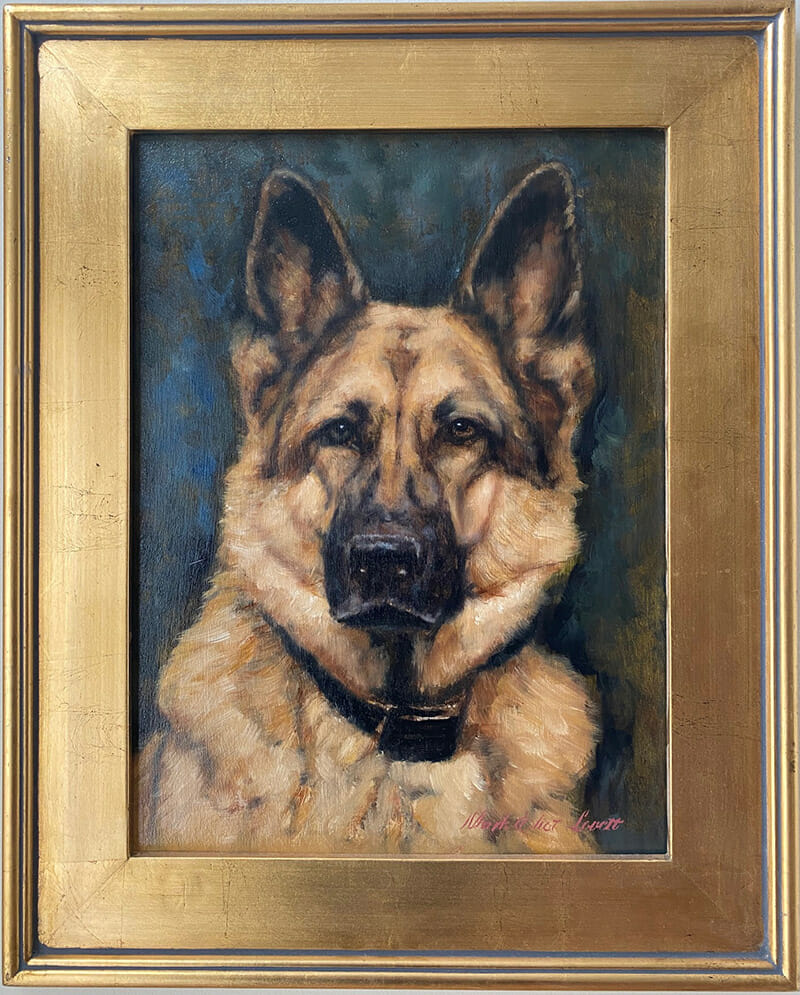 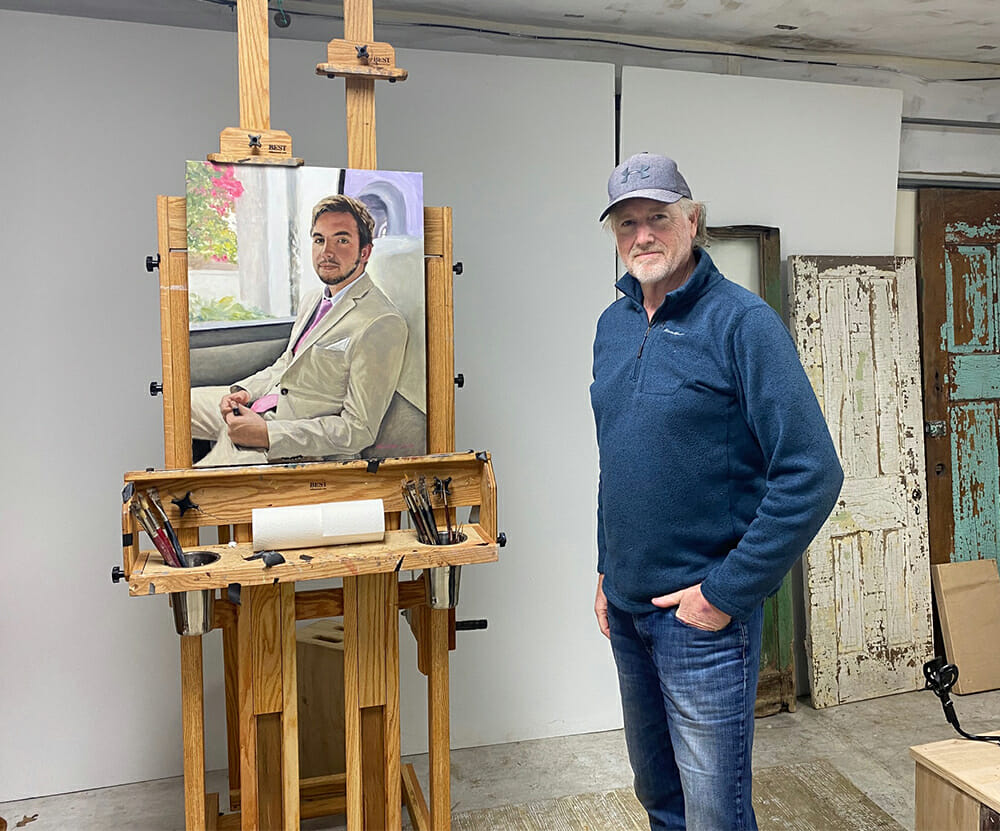 Learn more about “How To Commission a Portrait” 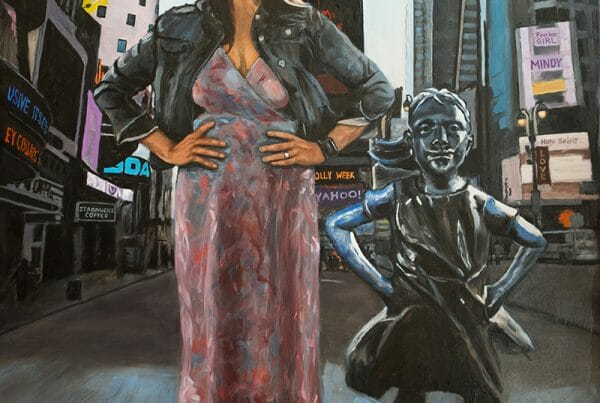 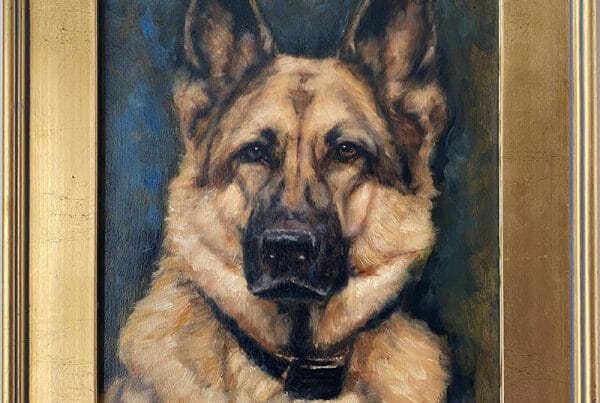 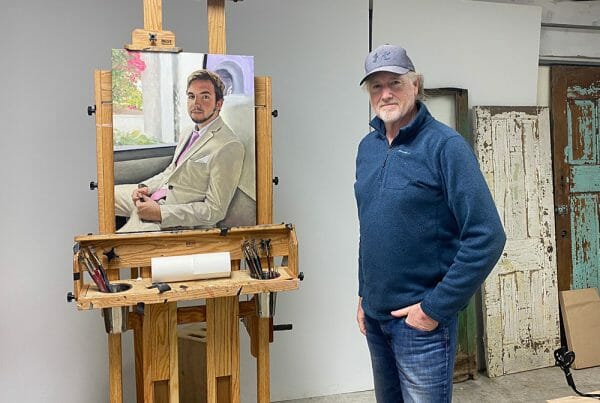